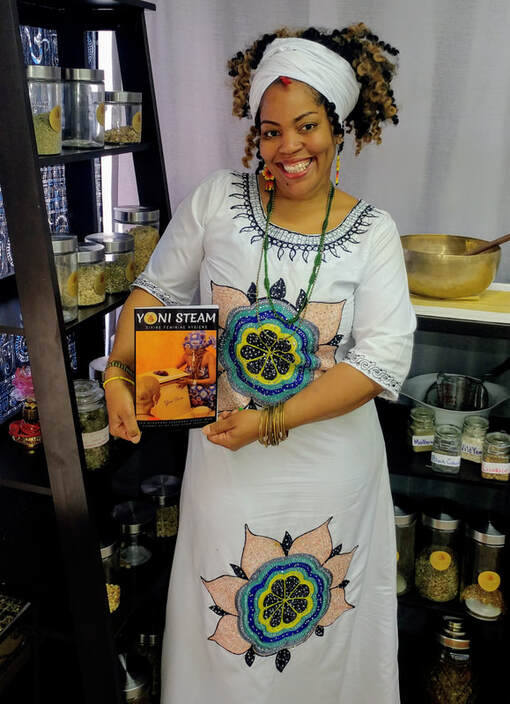 Yeye Olosunde Ajala
I am from the family of fire and the flowing rivers.  I hail from a royal family of Midwives, Healers, Leaders, Freedom Fighters and Priests. Once you have seen me you have seen Sweetness, you have seen love, you have seen beauty and a giver of life, you have seen the water Bearer and the water Healer. I am a compassionate teacher, vessel of healing and champion contributor to the field of Womb Wellness.  I have created several healing modalities to address the needs of women and families including the Yoni Steam, Prostate Steam, Womb Reiki, Womb Wrap Detox, Goddess Bell Therapy and Couples Reiki.  I am an internationally acclaimed Author (Find my Book 'Yoni Steam: Divine Feminine Hygiene' on Amazon), Priestess, Teacher, Sound Healer and Empath.
Yeye Osun created the Yoni Steam® in 2009 after eliminating the pain and heavy bleeding associated with Fibroids using her own holistic Yoni Steam method based on Ancient indigenous vaginal steam practices found in Africa, Suriname, Haiti, Jamaica, Asia and other parts of the globe.  Recognizing the extreme crisis and the alarming amount of womben (over ½ a million) who lose their wombs each year to hysterectomy, the majority being black women, she made the Yoni Steam method the central theme to healing a million wombs starting with our creative sacral center, the Womb and the Yoni.
“Studies show that only 10% of these hysterectomies are actually medically necessary.”  This Holistic Yoni Steam addresses the needs of the Woman: Mind, Body & Spirit and is provided with the recognition of the physical and mental stresses that contribute to dis-ease in the body.  The Yoni Steam Vision is continually expanded to meet the vision to "Heal A Million, One Womb At A Time" through teaching women how to use our unique and wholistic methods for self care and to share the vision with other women in other states so that we may touch more women.

Women who may benefit from a Y-steam treatment would be those with the following conditions: uterine fibroids, painful menstruation, uterine weakness, uterine prolapse, irregular menstrual cycles, ovarian cysts, endometriosis, reproductive adhesion/scar tissue, previous vaginal tear or episiotomy, and dark purple or brown blood at the onset or end of menses.  It is also for preventive care and general cleansing each month after your cycle.  In some cases a woman should partake in the y-steam treatment, these are: extremely heavy menstrual cycles, if you have a vaginal infection, open wounds, sores, or blisters, do not do if you are pregnant or think you may be pregnant.
Yeye Olosunde Ajala is has learned from various institutions, scholars, teachers, activists and healers.  She has studied and learned from Marimba Ani at an early age, Dr. Llaila Afrika of African Holistic Health, Dr. Akua Gray of a Life of Peace, Kaia UniverSoul for her Reiki knowledge, Dr. Rkhty Amen an Egyptologist, Linguist & Priestess,  and many more.  She received her Bachelors in "Womb" Sociology, is a Certified Holistic Health Consultant, received her Masters in Social Work with a focus on Women and Children, She is a New Usui Reiki Practitioner and has been a Community Activist her entire life.

She currently consults with women to assist them with releasing trauma and restoring wellness to the body temple. Her approach uses the principles of Goddess Ma’at as a guide: Truth, Justice, Harmony, Compassion, Order, Balance & Reciprocity. Olosunde provides and assists in Womens Retreats throughout the year dedicated to Yoni Love – ultimate love of our Sacred Womb Space.  As she assists the Mothers of Creation in Health & Healing she brings in a wide array of tools including the Yoni Steam, Womb Reiki, Womb Wrap, Womb Yoga, Meditation, Yoni Egg & Lingam Ring Gemstone Healing, Couples Reiki & Yoni Divination.

Baba Akintunde Ṣàngóṣakin Àjàlá founded Iba Orisa Temple in 2010 and is a professional practitioner of Traditional IFA and Orisa worship with over 17 years of training and experience in Osogbo, Nigeria in the Family of Ajala lineage of SANGO devotees. Baba Ṣàngóṣakin, attended Oyo State College of Education, Oyo State, Nigeria and Ifa Heritage Institute Oyo, Nigeria. Baba Ṣàngóṣakin, is one of the first students to learn under Oloye Fakayode Faniyi as Babalawo.

​Baba Ṣàngóṣakin, received IFA Initiation when he was 15 years old and a few years later, he initiated to SANGO and since then, Baba Ṣàngóṣakin has been practicing Orisa religion as Babalawo (IFA priest) and Babalorisa and has been in lineage of Sango since he was born. Baba Sangosakin's father, Sangodare Gbadegesin Ajala is the head of all Sango priest and priestess in Osogbo and a famous Artist in Nigeria.